Break Through Technology in Memory Storage!! 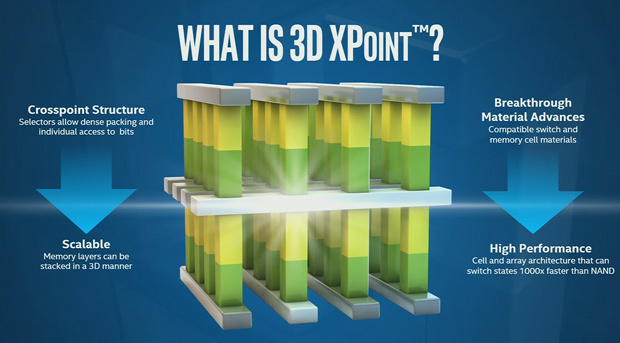 Intel Corporation and Micron Technology, unveiled 3D XPoint™ technology. It is a a non-volatile memory. If you haven’t see this in the news recently, you should really change your newspaper subscriptions.

There are 3 major changes that this technology brings to the front over the traditional NAND gate logic circuits being used until now (don’t worry if you don’t know how it works. Ill put up a post on that. For now just understand that Nand chips work by moving electrons back and forth to an isolated part of the transistors to switch them)

I wont get into too much detail (partly because i don’t know too much about it ;p ) but i will give you an overview as to how this technology is able to all that!

The chips have changed the traditional design completely! The chips are designed to be stackable to reduce overall size. The perpendicular conductors connect 128 billion densely packed memory cells. Each memory cell (like the image above) stores a single bit of data. This compact structure results in high performance and high density bits.

The technology make use of a selector grid instead of the conventional nand gate logic for switching each memory block. The cell is able to switch states faster than any existing non-volatile memory technologies today.

Memory cells are accessed and written or read by varying the amount of voltage sent to each selector. This eliminates the need for transistors, increasing capacity while reducing cost.

So yeah, that’s just an overview. Intel has given out quite a bit of information on their site itself (not too much though 🙂 ) so you can check it out here.